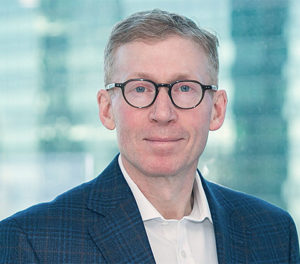 Pat Blandford joined Tokio Marine Highland as a board member in 2004 to focus on growth strategies. He assumed an operating role in 2011 as the Managing Director of Strategy and Finance. In that role, he led acquisitions, product line expansion and relationships with key capital partners, including Tokio Marine Kiln (TMK). He was named CEO in 2018 to lead the company’s expansion plans and assimilation with TMK.

Prior to joining Tokio Marine Highland, Pat spent 20 years investing in and advising growth services companies. He was a Managing Director of two private equity firms, Frontenac Company and CCCC Growth Fund. He led both firms’ financial services division and served on numerous boards of directors.

He began his career at Goldman, Sachs & Co. and is a Chartered Financial Analyst. Pat serves on the board of directors for Wellen Capital and Source Intelligence.